Bistoon of Kermanshah archaeological site with an area of 1650 hectares and 36,000 hectares of historical and environmental privacy located in the east of Kermanshah province. Also, the fact is that on the foot of Farhadkan Bistoon Mountain, next to the old and historical road of Kermanshah to Hamedan, a host of Aryan history and civilization has lingered.

Moreover, this rich area belongs to different historical periods. Besides, from all the prehistoric, pre-Islamic and post-Islamic periods in this region, findings have obtained that estimate the 70,000-year history for Bistoon. It seems that throughout Bistoon’s history, life has been going on steadily.

Furthermore ,Bistoon Kermanshah, a mountain that has always been of interest to people in the past centuries, is also one of the most important tourist attractions .Besides, Kermanshah province in many ways is important for the people of all ofIran and the world.

Also, this mountain is very important in terms of sports because Bistoon Kermanshah is the seventh highest rock in the world. Moreover, favorable climate and historical background and religions that have existed in this city have also added to the popularity and fame of Bistoon Kermanshah, highlighting the city for many compatriots and foreign tourists as a destination for their travels.

Bistoon is a historical collection about 30 kilometers east of Kermanshah, which is one of the most prestigious antiquities in the world.In addition, the complex and its natural landscapes listed on the World Heritage List by UNESCO in 2006.

The ancient and sacred site of Bistoon is located in the east of Kermanshah province in 5 km and 3 km wide and is one of the most prestigious antiquities in the world. This site has works from pre-date to Islamic governments.

Bistoon’s name derived from the ancient Persian word “Baghestan”, meaning “gods”. So, the first reference to this position was in Dioderos Sikulus’s book, which is part of The Greek Katzias’s writings about Bistoon. Also, in this reference, the stone of Bistoon has introduced by the mythical Assyrian queen Samiramis and introduced Bistoon (Bagastanon oros). It was mentioned in that reference to Bistoon that Mount Bistoon was provided to Ahuramsda.

Bistoon’s trilingual inscription deals with the first year of Darius the Great’s reign in his own language. Also, the year Dariush spent all of it fighting the false kings. After The Killing of Bardia and the fall of the government by Darius, there were 19 rebellions, large and small, throughout the Achaemenid Empire. Besides, after quelling these rebellions, The Great Darius decided to inform the people of his empire (and the world after him) how to take power and his first year in power.

In addition, he registered this important monument and statement in Bistoon over an ancient road. So, he was known for his special status, which has long called the land of the gods (Baghestan), which was the site of convoys and military crossings from Babylon and Baghdad to the Mountains of Zagros and Hamedan.

This embossed role – Dariush and Captives Painting – located at a vertical level of 3 meters long and at a width of 5.5 meters. Also, Dariush dressed in Persian, has an Assyrian beard and is a congressional officer and is on the left side of the Bistoon Parliament. Moreover, Darius’s size is greater than the captives to show the glory of this assembly.

Besides, the height of the captives was 1.17 and the height of Darius was 1.72 meters. In addition, two of Darius’s companions (seven people), including the archer Windfrena and the corpus Geaubrus, stand behind him.Furthermore, Darius, who has a bow in his left hand, has his left leg on the chest of his first enemy, Geomat, and Geomat has extended his hands begging up.

Also, there are 8 captives behind Guumat. Their names are Athrin, Nedet B. Yer, Forortish, Merthy, Chissen-e-Nie, Wat Yazdat, Arkh and Farad, respectively. Besides, they tied the captives’ necks together with ropes and their hands behind their backs.Later, the ninth captive, I.e. Sekayi’s stillness, added to the captives with a sharp self. In addition, over the heads of the captives, ahead of Darius, the painting of Forouhar is located, and Darius raised his right hand upwards in a sign of Ahura Maramada’s devotion. 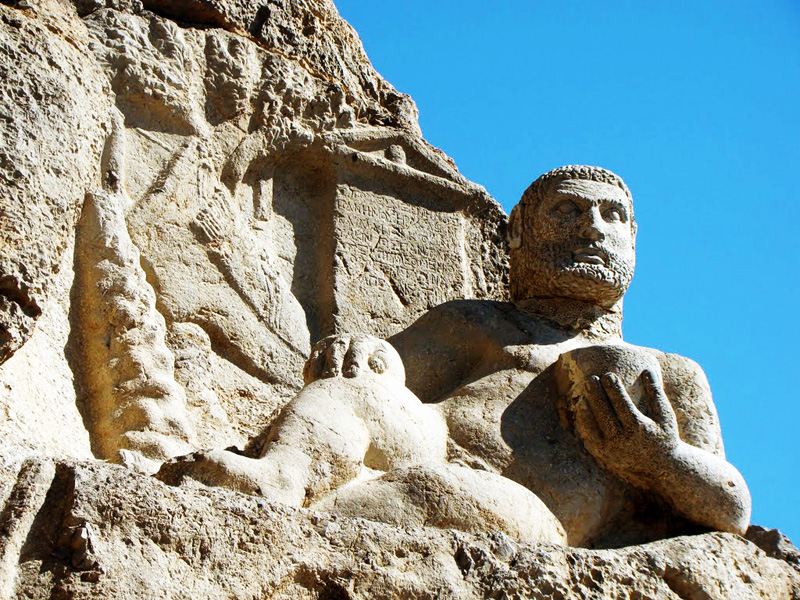 About 28 historical monuments from the Bistoon site have registered on the National Monuments List of Iran. Also, 13 outstanding works, including Dariush’s inscription, have placed on the UNESCO World Heritage List. Bistoon is located in Bistoon, the historical and cultural site of Bistoon. And this work was registered as one of the national monuments of Iran on September 29, 2002 with registration number 6463.

In addition, the reason that all of these works were located in one place. It is the place undoubtedly known from the sacred places of Iran. Also, because the water is the epitome of purity and light flowing out of the heart of Mount Bistoon. And Darius the Great, because of the importance of Kermanshah’s location. And its rocky mountains and the great works of its Aryan ancestors. It has chosen this place for the valuable inscription of Bistoon.

Here are some of these monuments in Kermanshah:

Bistoon of kermanshah, Statue of Hercules

The Hercules corpus displays a strong person in the physique. It is lying on the left side to the role of a lion in the shade of a tree. Also, the cup of wine in his left hand and hand is located on the right leg. Besides, the statue discovered on the hillside as a result of the construction of a road from Hamedan to Kermanshah.

Moreover, Hercules’ head stolen once, but after a few years it discovered and put back on Hercules’ head. An inscription from the Seleucid times is behind the Statue of Hercules.

The Bistoon Mirage is a spring that boils from the heart of the earth. And its water gathers in a not-so-large pond. Also, the existence of this mirage has been one of the main reasons for human settlements from the Paleolithic period to the present era at this point. Moreover, in historical times, it has used as a place for travelers. And caravans on the route from central and western Iran to Mesopotamia. In addition, most of Bistoon’s historical monuments are located around this mirage.

On the slopes of Bistoon Mountain, there are several caves called Mertarik, Mer do-Dr, Markher and Hunters, all related to the Middle Paleolithic period, where materials such as human and animal bones and stone and bone tools and chippers have discovered.

Also, for example, in the cave of hunters (opposite photo) the bones of animals such as deer, gazelles, wild cows and boars have been obtained. Besides, the hunters believed to have used the cave as a temporary shelter. And after butchering the hunts, they took to the main residence. So, the Hunters Cave has used until historical times and pottery has discovered from the Assyrian and Achaemenid periods.

The small grave, which dates from the Medes to the Sassanid period. It is located far to the right of the inscription of Darius I and at a lower altitude.

On the slopes of Bistoon Mountain, there is a four-way boulder with a range of 2.5 meters. With the role of three men on three sides. Also, the main role relates to The Parthian blah, which has not identified because of the dilapidated writings. Besides, two other roles are unknown men as if they were moving towards Blahsh. The role of Blahsh believed to have depicted the scene of religious devotion.

On the slopes of the Mountain and at the bottom of Dariush’s inscription, there is a prominent role of Bahram II and Goudarz II parthian. It has severely distorted due to the inscription from the Safavid period in the middle of it. Besides, the inscription belongs to Shaykh ‘Ali Khan Zanganeh, the ruler of Kermanshah during the Safavid era. It describes the endowment of properties for the caravanserai.

The bridge located about 150 meters long and 7 meters wide in the southwest of this city and on the Gamasiab River. Also, its name and architectural style indicate that parviz built in the late Sassanid period.  And possibly during the second Khosrow period.

Farhad Thrash, who named after Farhad Kouhkan and loves Shirin Seriani. It is a large wall with a length of 200 meters and a high of 36 meters, carved on the slopes of the Mountain and in the west of Dariush’s inscription. Moreover, although some believe that this wall belongs to the Achaemenid era, new theories suggest. It is likely during the Sassanid Khosrowparviz period to create an inscription or a prominent role.It has prepared, but it remains unfinished with Khosrow’s fall and death.

The palace located at the bottom of Mount and opposite Farhad Thrash. Also, the architectural style and its surrounding evidence show.  It is one of the late Sassanid works that has abandoned for unknown reasons. Besides, the remains of the palace were built during the Mongol Ilkhanid period, a caravanserai with remains.

Bistoon Bridge with 144 meters long and 7.6 meters wide constructed on the Dinor River of Water and on the old road of Kermanshah to the scene. Also, its foundations placed in the Sassanid period and have refurbished in later periods, including the Ilkhan and Safavid periods.

This caravanserai is one of the works of the Safavid era and its building has completed during the period of Shah Sulayman and with the efforts of Shaykh ‘Ali Khan Zanganeh. Also, it used as a checkpoint and prison in recent decades, but evacuated and refurbished to globally record  monuments.