Soltaniyeh is a city in Iran that is dotted with ancient ruins. The most significant and impressive of these ruins, however, is the Dome of Soltaniyeh. The Dome, which is also sometimes referred to as the Mausoleum of Il-khan Öljeitü aka Muhammad Khodabandeh,  was even more impressive when it was first completed all the way back in 1312 AD.

Construction on the dome actually began ten years prior, in 1302 AD, but whether one counts its “birthdate” as the day construction began or the day it was completed, it still has the distinction of being the oldest dome of its type (double shell) in Iran. Furthermore, it is also one of the largest domes constructed of brick in the entire world.

The Man Behind the Dome

Those who refer to the dome as the Mausoleum of Il-khan Öljeitü are paying homage to the dome’s architect and creator, a man also known as Sultan Muhammad Khodabandeh. Khodabandeh was born in 1280 AD and would go on to become the eighth ruler of the Ilkhanid Dynasty. His reign as ruler would last from two years after the start of the dome to 1316 AD.

Khodabandeh was practically born into his powerful role; his father, Arghun Khan, was the fourth ruler of the Mongol Empire Ilkhanate, ruling from 1284 to 1291. And his brother, Mahmud Ghazan, was the fifth successor of Genghis Khan and had been the ruler of the Ilkhanid Dynasty just prior to Khodabandeh’s appointment.

While Khodabandeh was baptized as a Christian, even receiving the name of Pope Nicholas IV, he would experiment with religion throughout his lifetime. He spent time practicing both Buddhism and Sunni Islam until finally converting to Shi’a Islam. His newfound belief in the Islamic faith was the reason that he changed his name to Muhammad.

Due largely to his strong faith and to the influence and direction of great Shi’a theologians, Maitham Al Bahrani and Al-Hilli, Khodabandeh developed and created the once-powerful city of Soltaniyeh and the renowned dome. Later, when his beloved mentor, Al-Hilli, died, Khodabandeh would have his remains moved into the shrine.

While Khodabandeh was deeply serious about his faith, there were other motivations for his creation of Soltaniyeh. Indeed, when he created the city, he fully intended for it to be the biggest and most powerful city in the entire world. And, for a time, the city was quite powerful. Now, however, it is mostly just a collection of ruins, though some families do still live in the area.

Though the city is but a shadow of its former self, it was at one time the capital of Mongol and remained so throughout the 14th century. While Soltaniyeh may no longer be considered a “major” city, at least as far as population and power are concerned, it still holds historical significance, so much so that, in 2005, The United Nations Educational, Scientific, and Cultural Organization (UNESCO) named it as a “World Heritage Site.”

Sites that receive the UNESCO “world heritage” designation are considered to be of extreme cultural and/or physical importance to history and to humanity as a whole.

When the Soltaniyeh dome was constructed, it was the tallest building in the entire world. While its height has since been surpassed by other structures, what is known about the building’s original features is still quite astounding. The dome features an octagon-shaped base and the dome itself is 54 meters high.

While the dome proper is undoubtedly the most talked about feature of the structure, it is important to note that it also includes a mausoleum, a dome chamber, and a vault.

The Mausoleum now holds Khodabandeh’s body, and, to this day, two guards watch over his headstone. The interior of the Mausoleum is richly decorated, containing mosaics and murals, and features both Kufic and Sol inscriptions.

The Dome and Dome Chamber

The Dome was once known for its magnificent tile and brick work. Now, however, its interior features representative floral designs and inscriptions. Currently,  new azure tile work is being completed by Iran’s Cultural Heritage, Handicrafts, and Tourism Organization to make the dome look more like its original self.

The Dome chamber is unique in design because it features muqarnas, which were typically seen in Persian and Islamic architecture of the time. Muqarnas, for those not familiar with the term, are corbels (structural brackets). The ones inside the Dome are particularly notable for their intricate design and decoration.

As mentioned previously, the Dome of Soltaniyeh is the oldest double-shell dome in all of Iran. It is unique in terms of more than just its age, however. The double-shell is formed by separated brick layers that run parallel to one another and that are joined through buttresses. It is believed to be the first double-shell dome composed in this way and would later go on to inspire other similar structures. 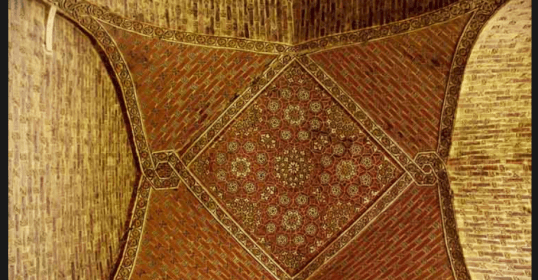 The Taj Mahal, for example, is believed to have been greatly influenced by the dome’s construction. Also, the Mausoleum of Khoja Ahmed Yasavi and other Iranian cupola structures owe their design to the Dome.  Likewise, Filippo Brunelleschi, an Italian architect, reportedly used the dome as inspiration when constructing Florence’s Santa Maria Del Fiore.

An Important Piece of History

When Khodabandeh built the dome, he did so largely because he wanted to cement Soltaniyeh as a powerful and incredible city. And, though the city did fall and is now in ruins, he somewhat accomplished this goal—or at least gave Soltaniyeh eternal importance-by constructing his famed dome.

Today, the dome is not all it once was, though a surprisingly large amount of the interior décor still stands strong. There are also major renovations and improvements being made on the dome, which will hopefully restore it to some semblance of its original glory and allow it to stand for future generations to enjoy.

Regardless of what happens to the Dome or of how it changes, it will always hold an important place in both architectural and world history.