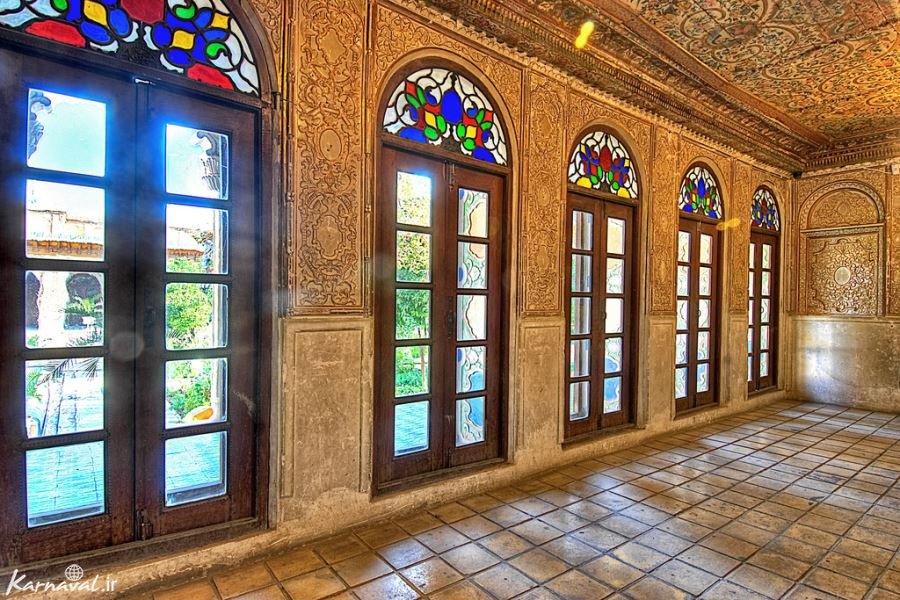 Zinatolmolk or Zintalolmoluk House is one of the famous buildings of Qajar period, which was built around 1290 AH in Shiraz by Ali Mohammad Khan Qavamolmolk II and completed in 1302 AH.

On the western side of Qavam orangery in the city of Shiraz in southern Iran, there is a beautiful mansion that used to be the residence of Zinatolmolk Qavami, the daughter of Qavamolmolk IV, which is named after this woman. The house of Zinatolmolk is now turned into the museum of fame.

Zinatolmolk was a family member of Qavamolmolk who was the ruler and sheriff of Shiraz and Fars province at that time.

She has been a good and compassionate woman, and all the time was helping the needy. During the first ten days of Muharram, which are the days to mourn for the third Shiite Imam, she used to hold mourning ceremonies at her home to feed the needy with charity food.

The house of Zinatolmolk was originally a habitat of Qavams and their families, which goes to the Qavam orangery through the door in the basement. Later, this house was named after its owner due to her benevolence.

The entrance of this mansion is one of its unique beauties. With seven crescent-shaped tiles and a pattern of two suns behind two lions holding swords, it shows two angels that are placed over them and a Quranic verse inscribed between them.

The house of Zinatolmolk has more than twenty rooms decorated with plaster, paintings and mirrors, which are very exquisite. There are also artistic windows with colored glass that create a beautiful reflection on the walls and the earth when exposed to the sunlight.

In parts of the main hall and some of the rooms, there are paintings that the artist has painted them with the combination of Iranian and European art, in which women and children could be seen.

Although the combination of Iranian and European art appears in the architecture and images of this house, the Iranian style is well preserved.

This house is now turned into the museum of waxworks. The statue of Zinatolmolk is built at the entrance of the museum to welcome the guests. The sculptures of this house are all made of waxes, and by artists with natural materials and accessories.

Some of the sculptures you will see in this museum include kings of the Achaemenid period, Atossa (daughter of Cyrus the Great), Kings of the Sassanid dynasty, Barbad (musician and poet of the court of Khosrow II), Karim Khan Zand, Saadi, Lotfali Souratgar, martyr Abbas Doran and others.

Interestingly, in the city of Hafez and at the museum of fame, there is no statue of Hafez Shirazi (due to the absence of a specific picture of him in the books). And, instead of his statue, there are books and miniatures of his poems.